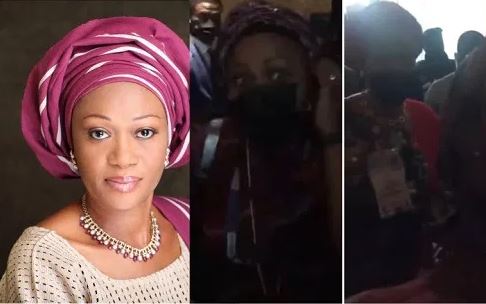 Arinola Oloko, the representative and politician who was seen in the viral video confronting Senator Remi Tinubu, wife of All Progressives Congress chieftain, Asiwaju Bola Tinubu, for calling her a thug at the venue of a public hearing on constitutional review on Wednesday, has opened up on what transpired that fateful day.

Oloko made this known in an exclusive interview with The PUNCH on Friday.

We had earlier reported that viral video showed that the Senator representing Lagos Central was involved in a shouting match with some Nigerians who attended the event at the Marriot Hotel in Lagos.

Tinubu led the Senate Committee on Review of the 1999 Constitution in the South-West.

However, there was a ruckus when Oloko was denied entry into the venue of the hearing. The 51-year-old woman, who protested her exclusion from the venue, was subsequently flayed by Mrs. Tinubu for being “rude”.

Some Nigerians at the scene had asked the senator to apologise to her but Mrs. Tinubu said, “I will not apologise for what I said. I saw it and I said it.”

Recounting her encounter while speaking with The PUNCH on Friday, Oloko said, “Everybody is complaining that the constitution is faulty. So, I was expecting a proper hearing for the Senate constitutional review. I was genuinely interested in the hearing.

“At the venue, I was talking with those at the entrance asking them to be fair and allow us enter. I don’t know what happened but the Senator came out and started saying, ‘Call that woman! Come here!’

“By default, I responded and went to her (Mrs. Tinubu). I told her my name and told her I am in her constituency and that she is my Senator and that we have been on the queue like forever.

“I tried to recount everything that had transpired to her. In my mind, I thought she would say, ‘Oh, this is wrong and all of that’. But she said, ‘Shut up! Shut up! Call the security to take this thug away’.

“At that point, I told her, ‘Ma, I am not a thug, I don’t look like a thug. I am not being violent and I don’t look criminal. That’s the qualification of a thug.”

Mrs. Tinubu has had similar encounters since she became a Senator in 2011.

Just recently, she criticised her colleague from Kogi State, Senator Smart Adeyemi, for expressing concern over the worsening security situation of the country.

Adeyemi had during a plenary session said that Nigeria was facing the worst instability since the civil war but Mrs. Tinubu interrupted him and tagged him a wolf in sheep clothing for allegedly speaking like an opposition.

Also in July 2016, Tinubu clashed with Senator Dino Melaye from Kogi State which saw both lawmakers calling each other unprintable names and charging at each other.

In 2015, Tinubu earned the rebuke of the Peoples Democratic Party senators when she stood up to speak while standing in the corner of the then Deputy Senate President, Ike Ekweremadu.