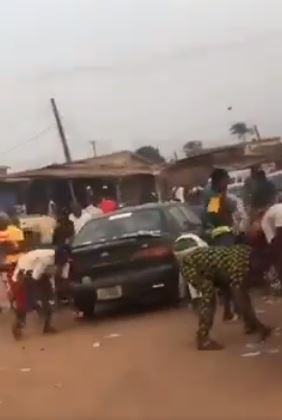 Many people rushed towards some cars in Benin as some suspected internet fraudsters threw money in the air for residents.

The video of the incident is currently making rounds on the internet.

The incident happened on a busy road in Benin. The naira notes descended on the floor and passers by could be seen flocking around the area to pick the money.

The video has generated mixed reactions from social media users. Some Netizens have opined that the money was gotten through fetish means, because an hard-working individual would not indulge in such act.

Some others argued that the actions of the guys was probably an instruction from their herbalists and it is a means to renew their wealth.

“Them wan use people destiny” – Lady exclaims as she witnessed a ‘money raining session’ in Benin city. pic.twitter.com/1rdgyQNiF0